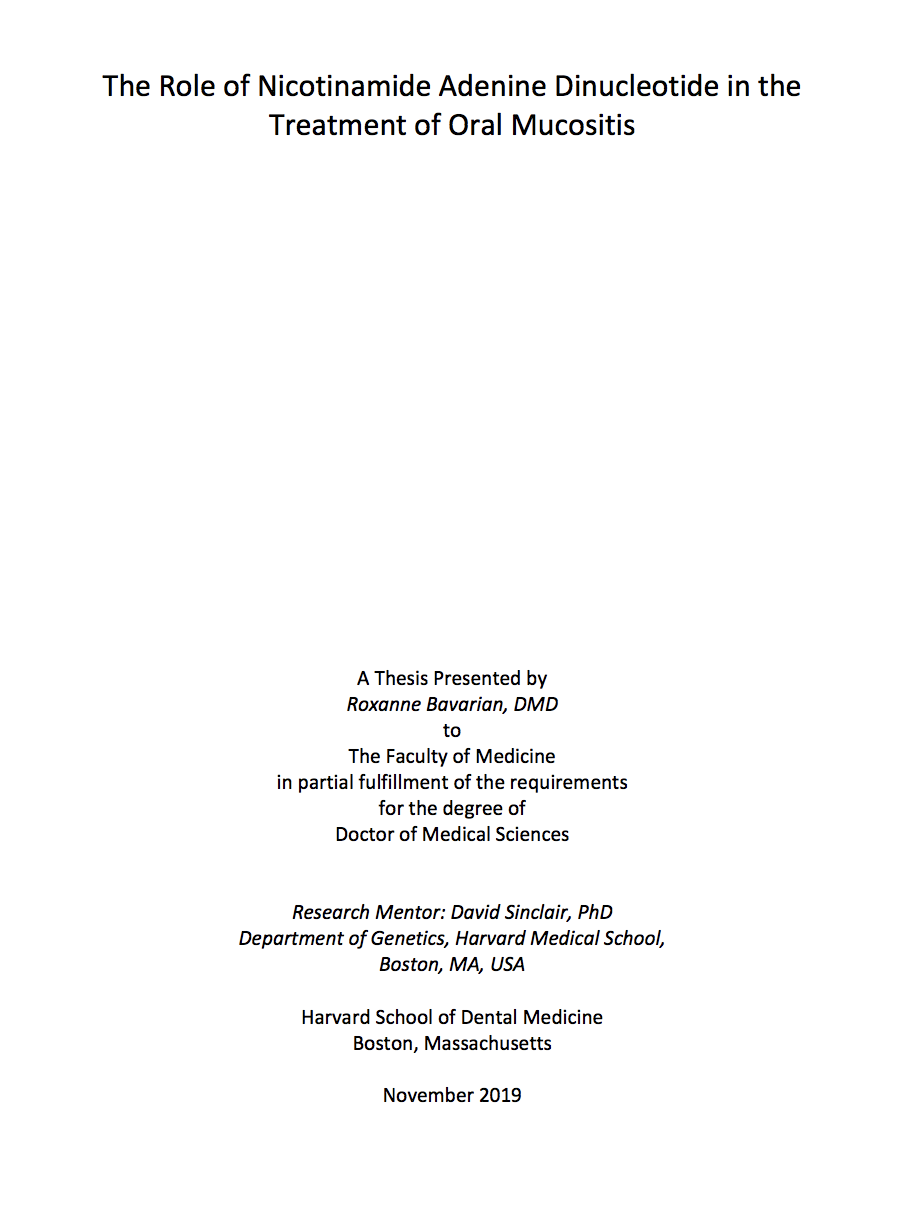 Oral mucositis is a toxicity associated with radiation and conventional chemotherapy that occurs due to the breakdown of the epithelium of the oral mucosa, presenting clinically as mucosal erosions and ulcerations. It is associated with symptoms that are both debilitating and costly, and, in severe cases, can lead to a worsened prognosis for the patient. Despite advances in the development of targeted chemotherapeutic agents, oral mucositis secondary to chemoradiation remains one of the most frequently targeted toxicities associated with cancer therapy, occurring in up to 100% of cases of head and neck cancer treatment and 60 – 90% of cases of myeloablative hematopoietic stem cell transplants.
Acute DNA damage such as that from radiation is known to cause hyperactivation of a group of DNA-repairing enzymes known as poly-ADP-ribose polymerases (PARPs), which rely on nicotinamide adenine dinucleotide (NAD+) as a co-substrate. We hypothesize that the mechanism of oral mucositis involves a depletion of NAD+ following exposure to radiation and/or conventional chemotherapy, and that this drop in NAD+ levels leads to a consequent decrease in the activity of sirtuins (SIRT1 – 7). Sirtuins are NAD+-dependent deacylases that have a number of roles, including suppression of inflammation and regulation of DNA damage repair. Thus, treatment with an NAD+ precursor such as nicotinamide mononucleotide (NMN) should help to maintain NAD+ levels and sirtuin activity to reduce the inflammation and DNA damage to consequently ameliorate oral mucositis.
To test this hypothesis, we first utilized primary human oral keratinocytes and showed that treatment with NMN can increase NAD+ levels and that, when subjected to radiation doses varying from 10 – 40 Gy, NMN reduces cell death in a dose-dependent manner. Treatment with NMN in combination with a SIRT1 inhibitor, EX-527, showed increased cell death, implicating the role of SIRT1 in NMN’s radioprotective effects.
Utilizing a hamster cheek pouch model of radiation-induced oral mucositis, we compared the effects of daily treatment with NMN 600 mg per kg dosed by gavage or applied topically to the cheek pouch. Both NMN treatment groups led to a modest amelioration of disease in comparison to the vehicle-treated control, particularly in the latter phase of disease progression. The group treated with topical NMN showed a statistically significant reduction in the number of days with ulcerative mucositis. Upon analysis of NAD+ levels, NAD+ concentrations were higher in the topically treated group. Histological analysis of cheek pouches extracted from animals showed a reduction in acute and chronic inflammation in the topically treated group, though not to a level of significance. A second study that evaluated an increased dosing of NMN to 600 mg per kg twice daily, as compared to NMN 600 mg per kg once daily and vehicle-treated controls, showed a modest reduction in the severity of oral mucositis but not to a level of statistical significance. Further animal studies are needed to optimize the dosage and administration of NMN to optimize its radioprotective effects.