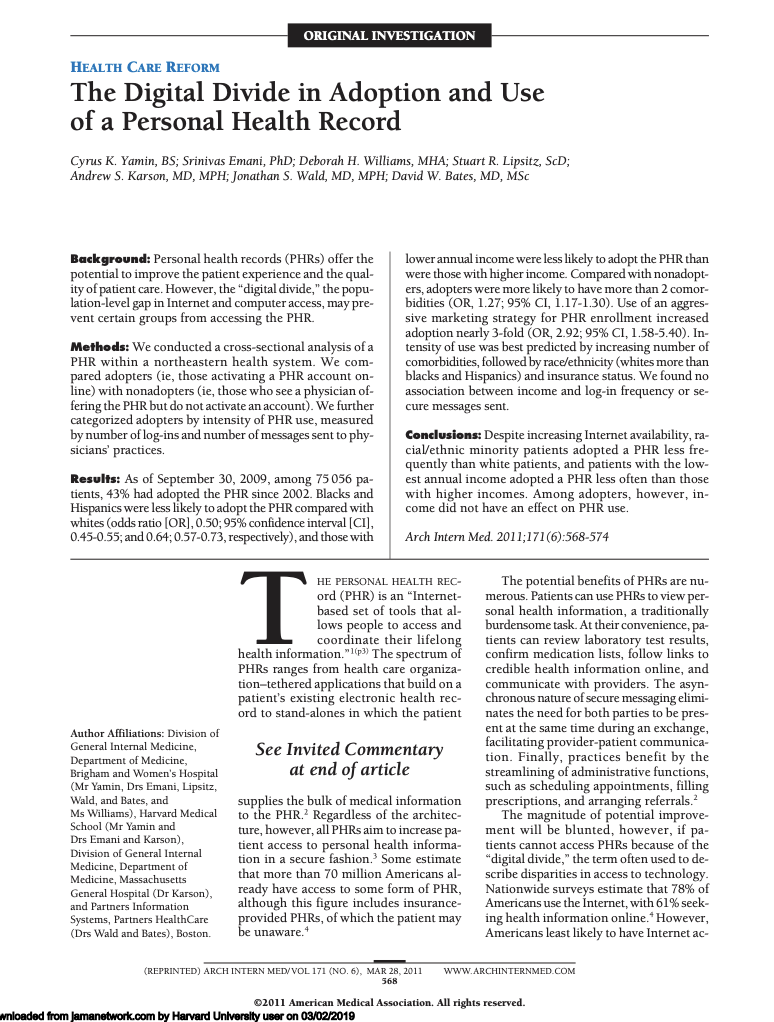 The Digital Divide in Adoption and Use of a Personal Health Record.pdf (122.1Kb)

Full text of the requested work is not available in DASH at this time ("dark deposit"). For more information on dark deposits, see our FAQ.

Background: Personal health records (PHRs) offer the potential to improve the patient experience and the quality of patient care. However, the “digital divide,” the population-level gap in Internet and computer access, may pre- vent certain groups from accessing the PHR.
Methods: We conducted a cross-sectional analysis of a PHR within a northeastern health system. We com- pared adopters (ie, those activating a PHR account on- line) with nonadopters (ie, those who see a physician offering the PHR but do not activate an account). We further categorized adopters by intensity of PHR use, measured by number of log-ins and number of messages sent to physicians’ practices.
Results: As of September 30, 2009, among 75 056 patients, 43% had adopted the PHR since 2002. Blacks and Hispanics were less likely to adopt the PHR compared with whites (odds ratio [OR], 0.50; 95% confidence interval [CI], 0.45-0.55; and 0.64; 0.57-0.73, respectively), and those with lower annual income were less likely to adopt the PHR than were those with higher income. Compared with nonadopters, adopters were more likely to have more than 2 comorbidities (OR, 1.27; 95% CI, 1.17-1.30). Use of an aggressive marketing strategy for PHR enrollment increased adoption nearly 3-fold (OR, 2.92; 95% CI, 1.58-5.40). In- tensity of use was best predicted by increasing number of comorbidities, followed by race/ethnicity (whites more than blacks and Hispanics) and insurance status. We found no association between income and log-in frequency or se- cure messages sent.
Conclusions: Despite increasing Internet availability, racial/ethnic minority patients adopted a PHR less frequently than white patients, and patients with the lowest annual income adopted a PHR less often than those with higher incomes. Among adopters, however, in- come did not have an effect on PHR use.