What Does ASMR Sound Like? Composing the Proxemic Intimate Zone in Contemporary Music 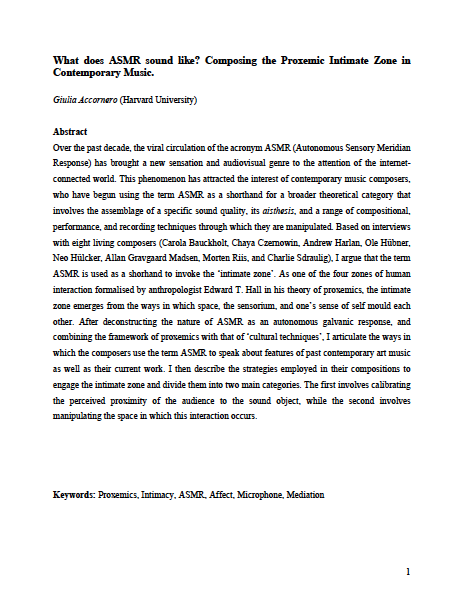 Over the past decade, the viral circulation of the acronym ASMR (Autonomous Sensory Meridian Response) has brought a new sensation and audiovisual genre to the attention of the internet-connected world. This phenomenon has attracted the interest of contemporary music composers, who have begun using the term ASMR as a shorthand for a broader theoretical category that involves the assemblage of a specific sound quality, its aisthesis, and a range of compositional, performance, and recording techniques through which they are manipulated. Based on interviews with eight living composers (Carola Bauckholt, Chaya Czernowin, Andrew Harlan, Ole Hübner, Neo Hülcker, Allan Gravgaard Madsen, Morten Riis, and Charlie Sdraulig), I argue that the term ASMR is used as a shorhand to invoke the ‘intimate zone’. As one of the four zones of human interaction formalised by anthropologist Edward T. Hall in his theory of proxemics, the intimate zone emerges from the ways in which space, the sensorium, and one’s sense of self mould each other. After deconstructing the nature of ASMR as an autonomous galvanic response, and combining the framework of proxemics with that of ‘cultural techniques’, I articulate the ways in which the composers use the term ASMR to speak about features of past contemporary art music as well as their current work. I then describe the strategies employed in their compositions to engage the intimate zone and divide them into two main categories. The first involves calibrating the perceived proximity of the audience to the sound object, while the second involves manipulating the space in which this interaction occurs.

This article is made available under the terms and conditions applicable to Individual Open Access License Articles, as set forth at http://nrs.harvard.edu/urn-3:HUL.InstRepos:dash.current.terms-of-use#IOAL