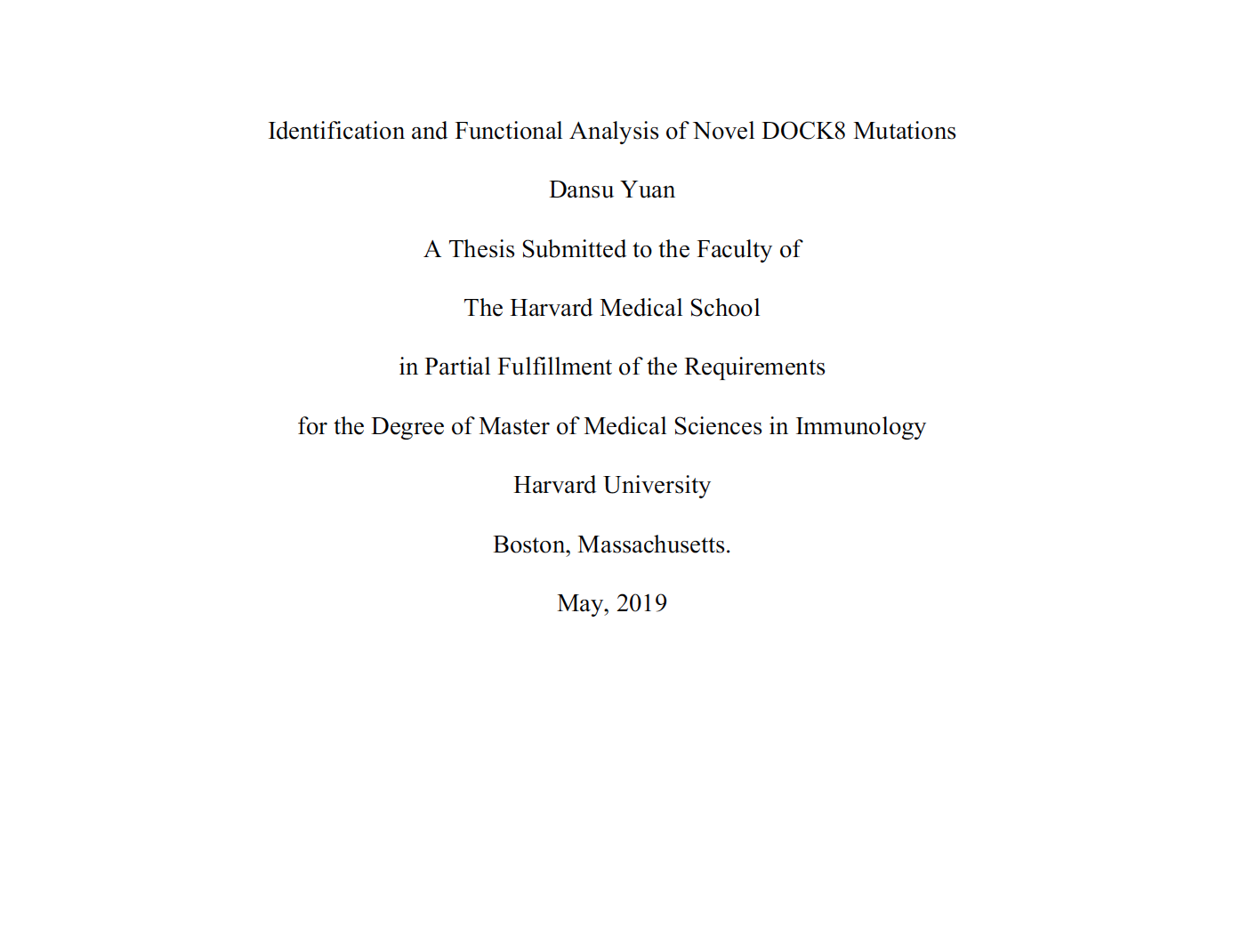 DOCK8, the gene encoding the Dedicator of Cytokinesis 8, was first identified in 2004. DOCK8 is a member of the DOCK family of proteins, found most abundantly in cells of the immune system. DOCK8 has pleiotropic functions, including role in lymphocyte migration, cytoskeleton organization, helper T cells differentiation and regulatory T cell suppression. DOCK8 deficiency is an autosomal-recessive combined immunodeficiency associated with recurrent infections, hyper IgE syndrome, autoimmunity, eczema and food allergy.
Most patients with DOCK8 deficiency lack protein expression (null protein). Here, we identified two patients with missense point mutations on their DOCK8 gene (c.2882 A>G, p.H962R; c.3460 C>T, p.R1154C) that gave rise to typical phenotypes of DOCK8 null deficiency but normal level of DOCK8 protein expression. Using these two mutations, we sought to explore more aspects and features of DOCK8’s functions in the immune system.
In recent years, DOCK8 has been reported presenting in nucleus. As DOCK8 is conventionally described as a cytosolic protein, it is meaningful to explore the specific functions that DOCK8 is executing in nucleus as well as the mechanism of this nuclear translocstion. We speculated that a sequence on DOCK8 protein might be responsible for this transporting process which we named as nuclear localization signal (NLS), we generated the vector expressing mutant DOCK8 carrying NLS deletion to test this speculation and study the specific influence that NLS deletion might bring to the normal functionality of DOCK8 protein.
In this project, we first need to confirm the relevance of these two mutations using site-directed mutagenesis on full-length DOCK8 plasmids. Second, we would like to determine the mechanisms by which these mutations (the two missense mutations and NLS deletion) act to disrupt DOCK8 functions.
To achieve these goal, we generated expression vectors encoding the human DOCK8 proteins, either fused with GFP or Myc tag at their C-termini. Vectors encoding either wild type or mutant DOCK8 proteins would be transfected into DOCK8-deficient Jurkat cells (leukemia T cells) or HEK293 cells (human embryonic kidney cells). Using the transfected cells, we performed in vitro experiments to observe the changes brought by these mutations on DOCK8 functionality. GFP-fused DOCK8 is used for immunofluorescent assays, including confocal microscopy to see DOCK8’s location. Myc-fused DOCK8 is used for blotting assays, including co-immunoprecipitation to see the proteins interacting with DOCK8.
Our results suggest that the mutation p.H962R impairs the nuclear translocation of DOCK8 protein. In nucleus, DOCK8 is associated with the gene of SOCS3, which is an inhibitor of STAT3 activation. There is no obvious difference between the STAT3 phosphorylation facilitated by DOCK8WT and DOCK8H962R. The patient carrying p.H962R mutation expresses comparable level of IL-17 comparing to the shipping healthy control. Overall, it is clear that the nuclear translocation of DOCK8 is impacted by the mutation p.H962R. However, the effects of this mutation on STAT3 function and Th17 cell differentiation remain unclear. The mechanism of DOCK8H962R causing disease still needs further investigation to be elucidated.
As reflected by the severe abnormal phenotypes displayed by deficient patients, DOCK8 plays a role in multiple important immune processes relevant to allergic and autoimmune diseases. Nevertheless, the full spectrum of signaling pathways that DOCK8 links to still remains largely unknown. Through this research, we sought to map the structural and functional features of DOCK8 in regulating the immune response. Our study could help establish the structural and functional attributes of DOCK8 relevant to different clinical phenotypes of DOCK8-deficient patients, also enable precision therapeutic approaches in the treatment of relevant allergic and autoimmune diseases.