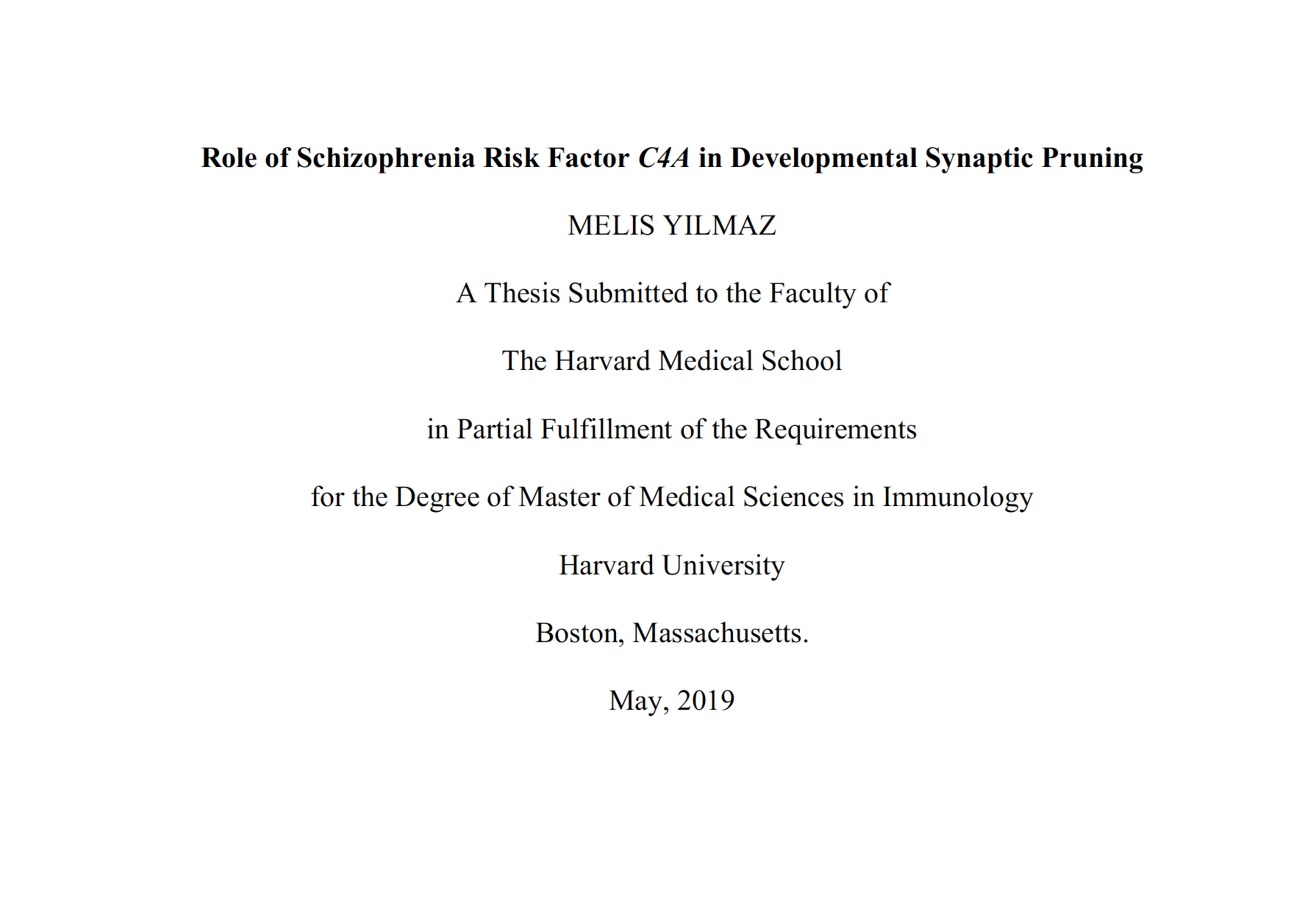 Schizophrenia is a heritable psychiatric disorder of unknown etiology that usually manifests in late adolescence. Recently, elevated expression of the complement component 4A (C4A) allele was found to be a major risk factor for schizophrenia. The C4 gene in humans is expressed in two functionally different isoforms: C4A and C4B, which differ by four amino acid residues, and it is the increased copy number of the A isoform that has been associated with a higher odds ratio of schizophrenia. Moreover, excessive loss of gray matter and reduced dendritic spine density in schizophrenia patients suggests that synaptic pruning may be a contributing factor to disease pathogenesis. Components of the classical complement cascade, including C1q, C4 and C3 are involved in the developmental process of synaptic refinement, which involves microglia engulfment of C3 tagged synapses via complement receptor 3 (CR3). With the recent finding that identifies C4A as a risk factor for schizophrenia, we hypothesize that C4A plays a unique functional role in synaptic pruning in the frontal cortex during neurodevelopment, and that increased C4A expression induces excessive classical complement cascade mediated synaptic pruning. To address this hypothesis, we generated a BAC transgenic mouse strain that express common human (h) C4A allele and lack mouse C4. Duplications of the hC4 gene in the mouse genome allowed us to have an overexpression model for understanding the effect of increased C4A copy number on classical complement medicated synaptic pruning. We sought to characterize the role of C4A and its overexpression during neurodevelopment by analyzing the synapse density using Golgi staining and immunohistochemistry, conducting mice behavior tests to observe alterations, and studying the microglia activation state and transcriptional profile in the frontal cortex by immunohistochemistry and RNA sequencing. Our results show that in the frontal cortex, C4 is primarily expressed by pericytes, and the increase of gene copy number reflect an increased level of C4 transcription. Additionally, examination of synapse at P60 and at P180 showed reduced synaptic density in the frontal cortex of mice with higher copy numbers of hC4A. Although microglia had no transcriptional difference between all transgenic mice, the overexpression group showed higher levels of engulfment and activation state. After conducting various behavioral tests, we observed alterations in social behavior, anxiety levels and working memory in mice that bore higher C4A copy numbers. Overall, this study characterizes the role that C4A plays in synaptic pruning in the frontal cortex, and suggests that C4A increased copy number results in some of the physiological and behavioral changes observed in schizophrenia, giving an insight to the mechanisms that lead to schizophrenia pathology.