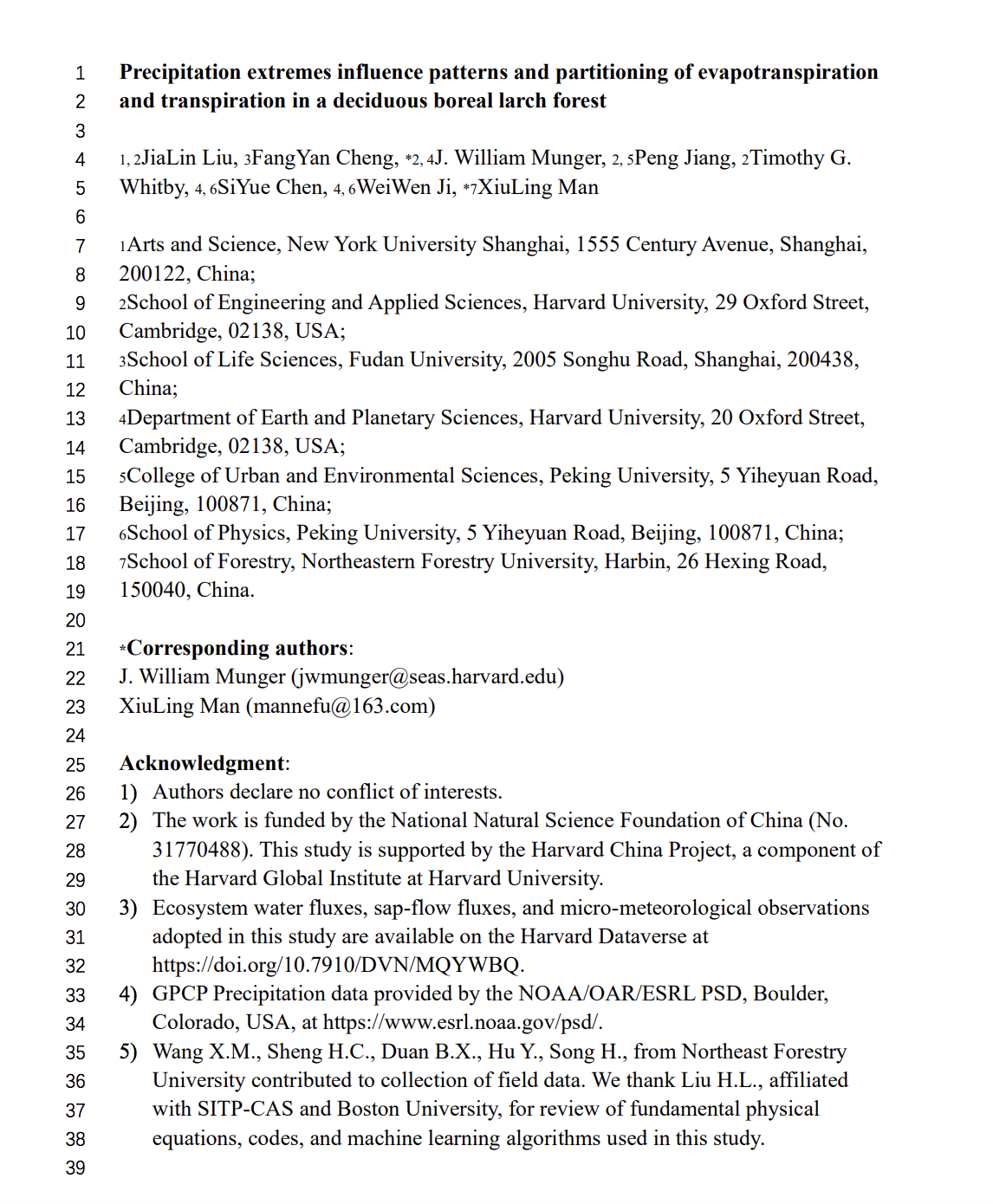 High latitude boreal forests are experiencing dramatic changes in climate and hydrology. It is not clear how boreal forests will adapt to hydrological change or how stable they will be to extreme climate fluctuations and shifts in ecosystem water availability (EWA; residuals between precipitation and evapotranspiration). Although there have been numerous studies in North American and European boreal forests, the Siberian boreal region is underrepresented. Moreover, Siberia is dominated by deciduous conifers (larch) that may have different response to shifting hydrology than boreal evergreens do. We observed evapotranspiration (ET) by eddy covariance technique and transpiration (T) by sap-flow probes on a subsample of trees within the flux-tower footprint through two growing seasons in a larch forest in northernmost China. Ecosystems at the margins of their zone could be amongst the first to experience significant shifts in structure and function. At this site there have already been signs of permafrost degradation and more frequent temperature and precipitation anomalies. The canopy-dominant larch accounted for half the total T fluxes. The remaining 50% was distributed evenly among intermediate and suppressed trees. T is the dominant subcomponent in ET, where overall T/ET varies of 66%–84% depending on precipitation patterns. In dormant and early growing seasons, T still constitutes a majority of ET even though the canopy foliage is not fully developed because cold soil creates a negative soil to air vapor pressure gradient that impedes evaporation. However, in the peak growing season, excess precipitation reduces T while providing sufficient wetness for surface evaporation. ET from standard data product based on MODIS satellite reflectance underestimates tower ET by 17%–29%. Solar-induced chlorophyll fluorescence measured by satellite is well correlated with tower ET (r2 = 0.69–0.73) and could provide a better basis for regional ET extrapolations. A global comparison of data for 2000–2018 period reveals that boreal forests not only have the smallest annual MODIS ET but also the least EWA compared to temperate and tropical forests. Also, even though boreal deciduous and evergreens have comparable annual ET, their T/ET and EWA are distinct. This work highlights how short-term precipitation extremes may shift ecosystem function and structure by changing EWA through exported runoff. Sites along boreal ecotones are critical to observe for signs of shifts in their structure, function, and response to climate anomalies.