Evolution of the mammalian fauces region and the origin of suckling 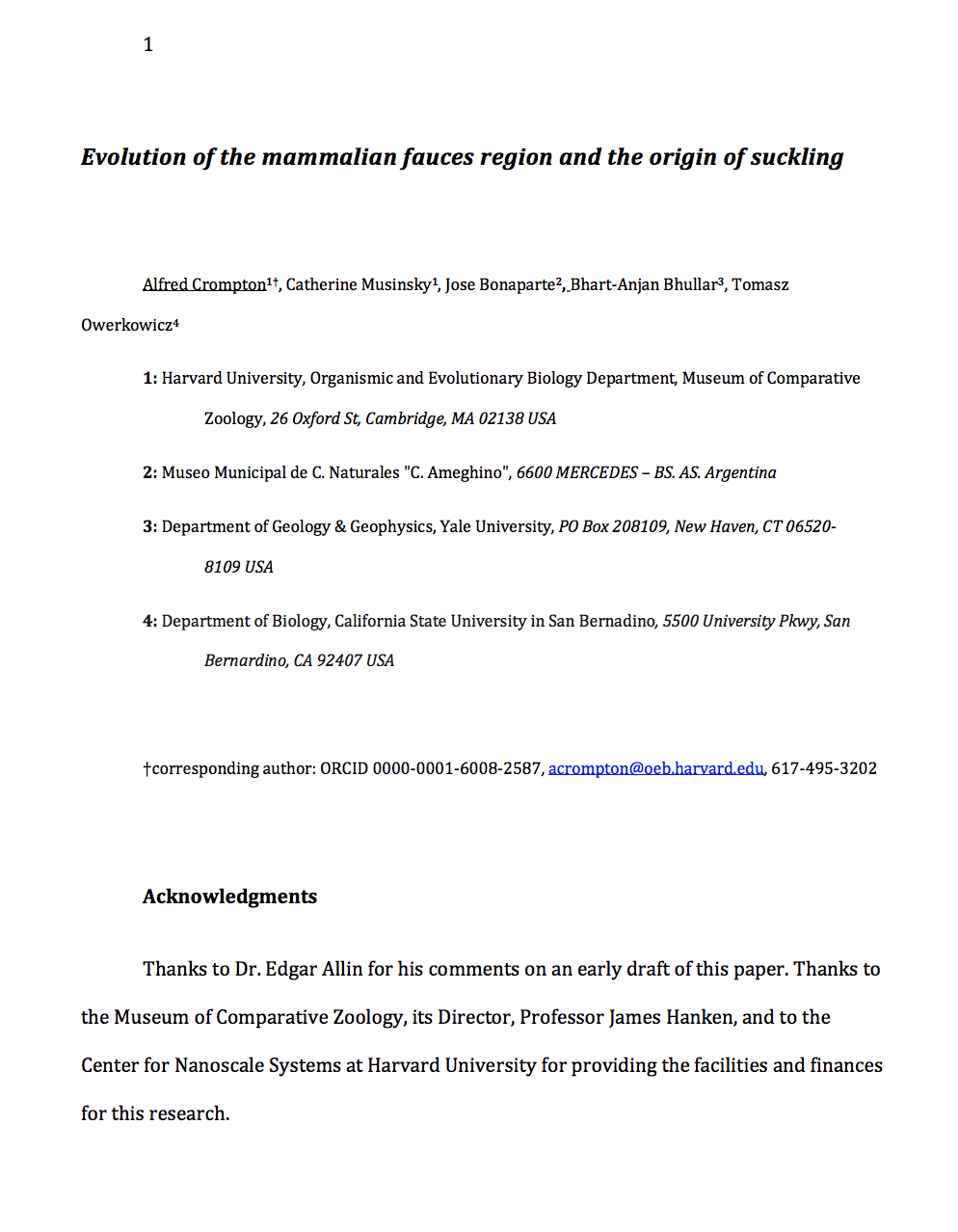 Therian suckling requires the presence of two oral seals: an anterior one formed by the tongue partially surrounding the teat and pressing it against the palate, thereby closing the gap between the exterior and oral cavity; and a posterior seal between the back of the tongue and the part of the soft palate that stretches between the ventral edges of the pterygoid hamuli. This posterior seal closes the fauces, viz. the passage between the oral cavity and oropharynx. While the anterior seal is formed by the tongue alone, the posterior seal requires synchronous activity in the tensor veli palatini, which stiffens the soft palate, along with the palatoglossus, mylohyoideus and intrinsic tongue muscles, all of which elevate the tongue against the soft palate. At the beginning of a suckling cycle both seals are intact. The surface of the tongue between the two seals lowers, causing negative pressure which draws milk into the oral cavity from the teat. Subsequently when the posterior seal relaxes, milk flows from the oral cavity through the fauces into the oropharynx. In therian mammals, the pterygoid bone’s hamuli and the tensors veli palatini they support play an important role in the transfer of liquids, whether acquired by sucking or lapping, from the oral cavity to the oropharynx. The first appearance of these structures in mammalian ancestors provides a clue as to when both suckling and the therian mechanism for food transport through the oral cavity first arose. To trace the origin of these features, we studied serial sections of a pouch young marsupial and CT scans of non-mammalian cynodonts, ictidosaurs, mammaliaforms. We conclude that the hamulus arose from the pterygopalatine bosses, and the tensor veli palatini from a medial slip of the reptilian posterior pterygoideus that shifted its origin from the posterior border of the pterygoid onto the lateral surface of the pterygopalatine bosses. We suggest that stress and strain on the on the precursor cells of pterygopalatine bosses by the tensor veli palatini led to the formation of secondary cartilage that ossified and fused with the bosses to form the pterygoid hamuli. The mammalian medial pterygoid arose from the lateral part of the posterior pterygoideus when its origin shifted from the transverse process of the pterygoid to the palatine and pterygoid hamulus. The mammalian lateral pterygoid arose from the reptilian pseudotemporalis. Monotreme ancestors either lost the tensor veli palatini, palatoglossus and pterygoid hamuli or never developed them. Extant monotreme hatchlings have tongues with a structure and function unique among mammals, and use a mechanism other than suckling to ingest maternal milk. Their fauces region was modified to break down invertebrates between keratinized pads on the posterior tongue and on the ventral surface of a long palatine.