The Swing Voter Paradox: Electoral Politics in a Nationalized Era 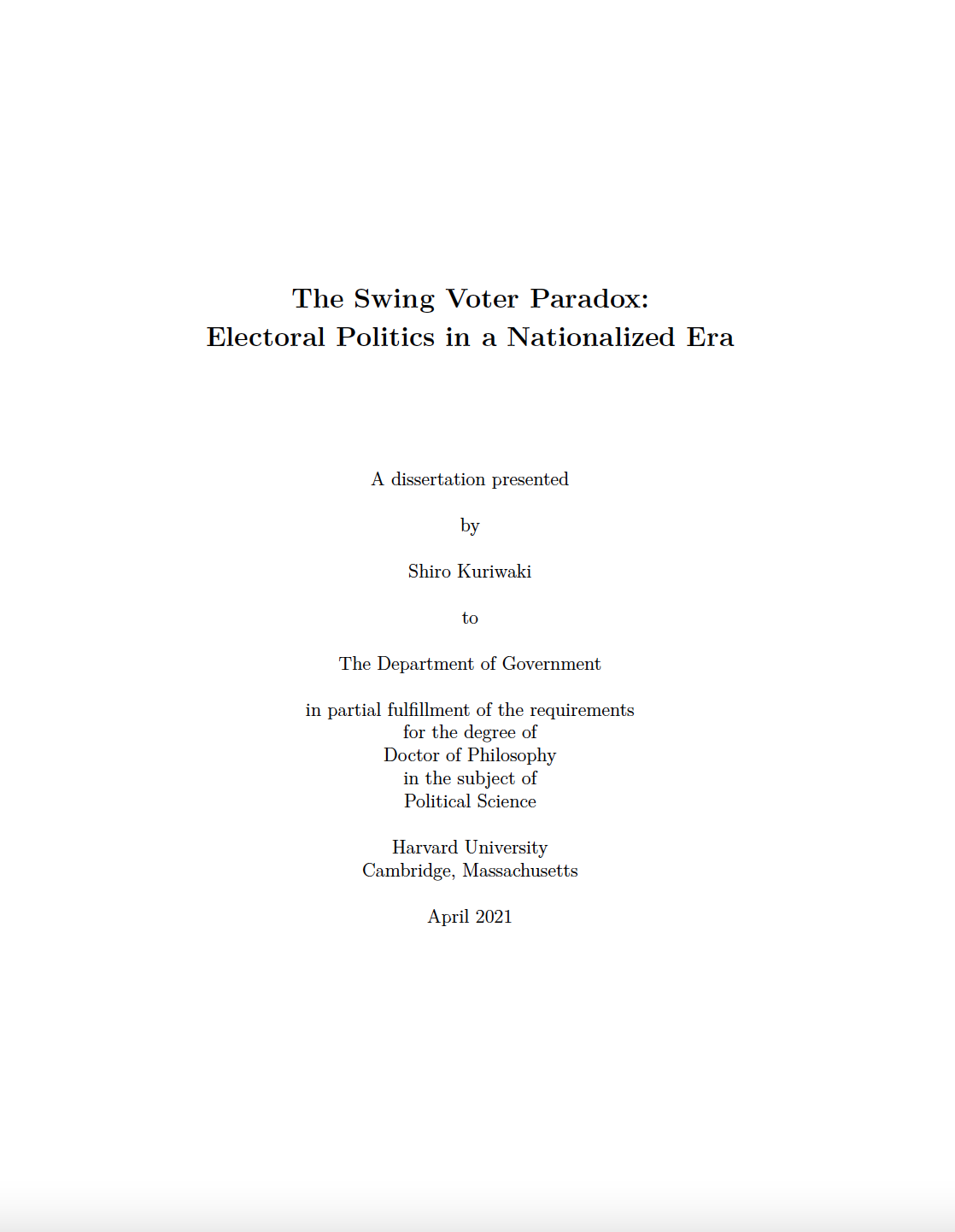 With each successive election since at least 1994, congressional elections in the United States have transitioned toward nationalized two-party government. Fewer voters split their tickets for different parties between President and Congress. Regional blocs and incumbency voting --- a key feature of U.S. elections in the latter 20th century --- appear to have given way to strong party discipline among candidates and nationalized partisanship among voters. Observers of modern American politics are therefore tempted to write off the importance of the swing voter, defined here as voters who are indifferent between the two parties and thus likely to split their ticket or switch their party support.

By assembling data from historical elections (1950 -- 2020), surveys (2008 -- 2018), and cast vote record data (2010 -- 2018), and through developing statistical methods to analyze such data, I argue that although they comprise a smaller portion of the electorate, each swing voter is disproportionately decisive in modern American politics, a phenomenon I call the swing voter paradox. Historical comparisons across Congressional, state executive, and state legislative elections confirm the decline in aggregate measures of ticket splitting suggested in past work. But the same indicator has not declined nearly as much in county legislative or county sheriff elections (Chapter 1). Ticket splitters and party switchers tend to be voters with low news interest and ideological moderate. Consistent with a spatial voting model with valence, voters also become ticket splitters when incumbents run (Chapter 2). I then provide one of the first direct measures of ticket splitting instate and local office using cast vote records. I find that ticket splitting is more prevalent in state and local elections (Chapter 3). This is surprising given the conventional wisdom that party labels serve as heuristics and down-ballot elections are low information environments.

A major barrier for existing studies of the swing voter lies in the measurement from incomplete electoral data. Traditional methods struggle to extract information about subgroups from large surveys or cast vote records, because of small subgroup samples, multi-dimensional data, and systematic missingness. I therefore develop a procedure for reweighting surveys to small areas through expanding poststratification targets (Chapter 4), and a clustering algorithm for survey or ballot data with multiple offices to extract interpretable voting blocs (Chapter 5). I provide open-source software to implement both methods.

These findings challenge a common characterization of modern American politics as one dominated by rigidly polarized parties and partisans. The picture that emerges instead is one where swing voters are rare but can dramatically decide the party in power, and where no single demographic group is a swing voter. Instead of entrenching elections into red states and blue states, nationalization may heighten the role of the persuadable voter.